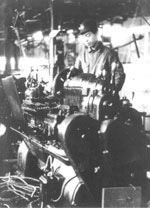 Tadao Kashio, one of the founders of Casio Computer Co., Ltd., was born in Kureta-mura (now Nankoku City) in Kochi Prefecture, Japan, in 1917. In 1923, after the Great Kanto Earthquake, the whole Kashio family moved to Tokyo at the invitation of an uncle working there. After graduating from high school, Tadao began working as an apprentice to a lathe operator. The factory owner recognized Tadao’s skill and encouraged him to begin studies at Waseda Koshu Gakko (now Waseda University), while still working at the factory. He gained experience in a variety of jobs, making pots, pans, and bicycle generator lamps, and soon earned a reputation for himself and received subcontracts to process parts. In 1946, Tadao set up his own business called Kashio Seisakujo, in Mitaka, Tokyo.

April 1946
Yubiwa pipe invented, a finger ring allowing cigarettes to be smoked down to the nub, and becomes a hit product 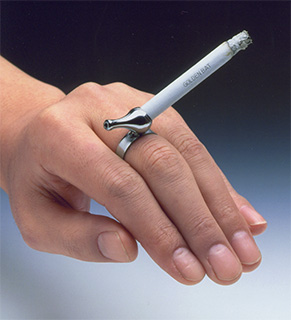 Kashio Seisakujo was a small subcontractor factory that made microscope parts and gears. Tadao had three younger brothers, Toshio, Kazuo, and Yukio. Toshio, who was working as a technician, decided to leave his job and join Kashio Seisakujo, thinking that he could invent something to help promote his brother's business. Utilizing his natural inventiveness, Toshio tried out several new ideas. One of these was the yubiwa (finger ring) pipe. At that time in postwar Japan, commodities were in short supply, and people smoked their cigarettes down to the very nub. For this reason, Toshio came up with a ring-mounted cigarette holder so that he could also smoke while doing his work. Tadao produced it on a lathe, and their father Shigeru went out to market it. Orders gradually began to pour in and the yubiwa pipe became a hit product soon after it was produced. The profits from this invention would later go towards the capital needed for development of a new kind of calculator. 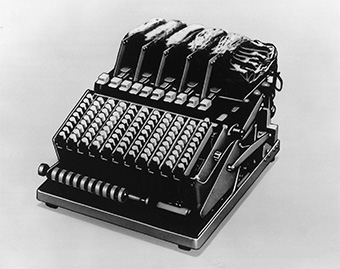 While looking for a new product idea to follow the yubiwa pipe, the Kashio brothers laid eyes on foreign-made electric calculators at the first Business Show held in Ginza, Tokyo, in 1949. The gears in these calculators were turned using an electric motor, and although they were faster than the hand-operated calculators commonly used in Japan at the time, they were much slower than calculators today and produced a shrill noise. Toshio thought that he could resolve this problem by using electrical circuits. Using a type of electromagnet called a solenoid, he began developing an electric calculator without gears. Through a process of repeated trial and error, Toshio eventually produced Japan's first electric calculator in 1954. However, when the two brothers showed it to a trading company that imported calculators, the representative told them that their calculator was out of date because it could not do continuing multiplication (multiplying two numbers and then multiplying the result by another number and so on).
It was back to the drawing board, in search of a new prototype. Around that time, the two younger brothers, Kazuo and Yukio, also joined Kashio Seisakujo. They advanced the development by dividing up the work—Toshio came up with the ideas, Yukio, who had taken mechanical engineering at university, drew the plans, and Tadao and Kazuo did the production. In 1956, they were close to completing a calculator with a continuing multiplication function, and all they had left to do was figure out how to mass-produce it. At this point, Toshio suddenly said he wanted to completely redesign the calculator. The solenoid design with its complicated mechanical structure meant potential difficulties for mass production. Toshio wanted to eliminate the solenoid design and use relays like those employed in the telephone exchange equipment of the time, in order to make a completely electric calculator. 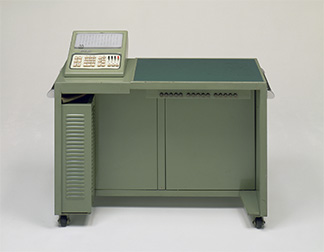 Equipped with relays, the 14-A was the world’s first compact all-electric calculator. In the 1950s, gears were used in office calculators, which took about 10 seconds on average to perform multiplication or division. Furthermore, because the gears were rotated at high speed by electric motor, there was also a noise problem. In order to overcome these issues by developing a calculator based on a completely new concept, the Kashio brothers looked at relays, a technology used by telephone exchanges at that time. Massive computers equipped with 13,000 relays were already in use. With its release in 1957, the 14-A was able to perform the four basic arithmetic operations up to 14 digits using just 341 relays. The Kashio brothers also succeeded in making a calculator that was desk size — small enough to be installed in an office. While gear-type calculators took about 10 seconds to perform multiplication and division, the 14-A took only five to six seconds, and was much quieter. Moreover, the calculators at that time used what was called a “full keypad,” featuring a column of keys (0 to 9) for each of the digit places. The 14-A had just 10 number keys, just like pocket calculators today. Casio had made calculation more efficient and labor-saving, while greatly improving usability. 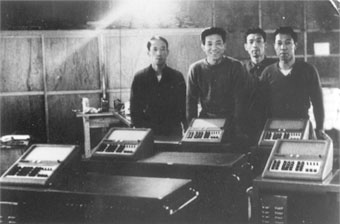 Finally, when the 14-A was completed, a sales contract was signed with Uchida Yoko Co., Ltd. as the exclusive dealer, and Casio Computer Co., Ltd. was established in June 1957 as the development and production company for the relay calculators. The brothers asked their father, Shigeru, to fill the position of president, which he accepted. The company name initially used Kashio in Japanese kanji, but the name was then changed to katakana as the brand grew more popular in October 1960. 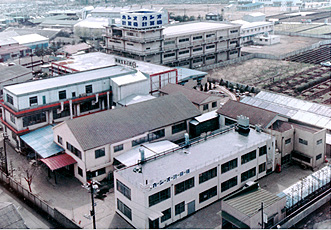 With the relay calculator selling at a good clip to large corporations and research institutions, Casio continued to grow. In order to meet the growing demand, a new factory was built in Yamato-machi, Kitatama-gun (now Higashi Yamato City), and it entered full production in 1960. The company worked hard to develop new products, and new types of calculators were released one after another, including the TUC Compuwriter, an automatic form output device that connected to an electric typewriter, and the AL-1 calculator for scientific and technological use. Casio continued to lead the market. 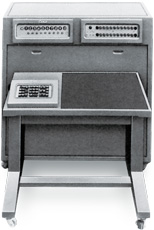 The relay-type computer AL-1 was a scientific calculator with a programming function. By setting a program using six gears, each with 60 teeth, a series of calculations could be performed automatically. In addition, because the six gear units could be removed, multiple calculation routines could be programmed. Due to this ease of use, the AL-1 was popular among many government and university researchers. One reason Casio was able to develop such a useful calculator was the precise feedback it received from researchers during development. These exchanges started with the development of the 14-B, a technical relay-type calculator released in 1959 that featured a square root calculation function. At that time, there were no programmable calculators for advanced technical calculations, and researchers spent a lot of time on computation rather than their primary work. In 2014, the AL-1 was recognized as an important achievement in the history of Japanese science and technology, and was listed on the register of essential historical materials for science and technology (future heritage technology) by the National Museum of Nature and Science in Tokyo. 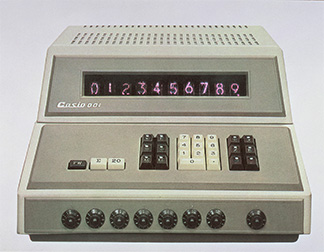 The 001 was born as Casio took on the challenge of developing its first electronic desktop calculator. With an addition and subtraction speed of 0.01 seconds, the 001 was named to reflect Casio’s regret and determination to re-start calculator development in the electronic era from zero. After Casio developed its 14-A relay-type calculator in 1957, it became an industry leader. In 1962, however, a manufacturer in the U.K. announced the world’s first electronic desktop calculator. Japanese manufacturers then began developing electronic calculators in 1964, and the technology started to gain attention. At this point, Casio was still focused on improving its relay calculators; when it announced a new relay model, the technology direction had already shifted to electronic transistors. Electronic models could be used on the desktop while offering high calculation speeds and silent operation. Realizing that it could only survive as a pure calculator manufacturer by keeping up with the latest product developments customers wanted, Casio decided to begin full-scale electronic calculator development. In addition to accelerating the four basic arithmetic operations, the 001 was equipped with the first seven-digit constant storage dial and memory function in a calculator. The aim was to improve the efficiency of various calculations. The development of convenient features for customers continued, and two years later in 1967, Casio released the world’s first software-type calculator. The AL-1000 enabled calculation routines to be easily input into the memory using the keypad. This is how Casio proved it would be a permanent presence in the calculator market. 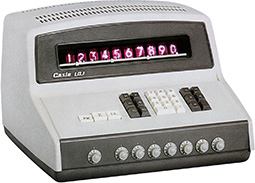 Due to strong sales in Japan, offers began to come in from overseas for the Casio 001 desktop electronic calculator. Seeing a good opportunity to expand abroad, Casio developed the Casio 101 with quality enhancements for overseas markets. The company improved the electronic circuits, drastically reduced the number of electronic components, and adopted transistors with excellent temperature resistance. In addition, by adopting a more durable plastic package, Casio made the calculator more durable for long-distance transport under adverse conditions. Weight and price reductions were also achieved. The 101 began exporting to Australia in 1966, and a European office was established in Switzerland the following year. In 1970, Casio Inc. (now Casio America, Inc.) was established in the United States, and Casio Computer Co. G.m.b.H. Deutschland (now Casio Europe G.m.b.H.) was established in Germany in 1972. These moves were the beginning of Casio’s expansion around the world.

While expanding its sales routes, Casio also promoted development of various new models. The AL-1000, completed in 1967, was the world’s first programmable calculator with software. In early computers and high-performance calculators, programs were created by setting and recombining removable hardware parts. With the AL-1000 however, calculation routine software could be easily programmed using a keyboard. This meant that troublesome rearrangement of parts was no longer necessary. By calling up the stored calculation routines, complex calculations such as scientific and technical computations could be easily performed. Not only that, the AL-1000 was just as compact as a regular calculator of the time, even with its programming function, thanks to the compact storage component, called a magnetic core, used for the 14-digit operation register, storage register, and program storage device. At a price point of 328,000 yen, it was only about 30% more than a regular calculator, and it became a best seller in Japan, Europe and North America. 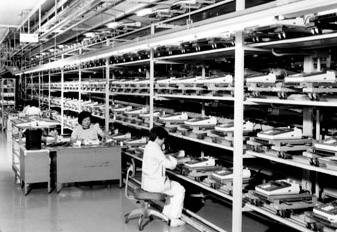 With Casio already in the top group of electronic calculator manufacturers, the Kofu Factory was established in order to raise Casio’s production capacity more than threefold, to 10,000 units per month. The 3,600 square-meter No. 1 building was completed first, exceeding the size of the Tokyo Factory, which had been the main production plant until that point. Two years later the No. 2 building was built, and the No. 3 building was completed in another two years. This facility continued to grow as Casio’s main production facility and later went on to handle the production of a subsequent big-hit product, the Casio Mini personal electronic calculator.