The G'zOne was a cellular phone with water and shock resistance. In 2000, Casio was the last of various Japanese manufacturers to enter the cellular phone market. Therefore, in order to make use of its unique strengths, just like it did for G-SHOCK, Casio pursued development based the concept of offering thorough product “toughness” and enhancing basic usability as much as possible. Casio’s first mobile phone, the C303CA, gained popularity especially among young people, because it could be used with confidence in the rain, or under other harsh conditions found in everyday life. Because of its “toughness” that made it hard to break, the G'zOne was perfect for all kinds of conditions. As a result, the product was also appreciated by people spending a lot of time outside, including outdoor enthusiasts, motorcycle delivery drivers, and construction workers, and was used for many years. 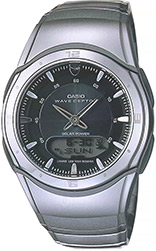 The Wave Ceptor WVA-300 was a solar-powered radio-controlled watch that could automatically sync itself to the correct time by receiving standard time radio signals. In other words, wearers could always know the correct time without having to adjust the watch manually. Since it was also solar powered, it offered the convenience of not needing battery replacement (except for eventual replacement of the rechargeable battery). Casio had long been working on improving basic watch performance including accuracy, battery life and ease of use. It had been pursuing this since the release of the Casiotron, which offered an automated calendar, based on a development concept for a fully automatic watch. The same was true for radio-controlled watches. After Casio’s first radio-controlled watch, the FKT-100L, released in Europe in 1995, came the WVA-300 released worldwide in 2001, and The G, launched worldwide as a solar-powered radio-controlled G-SHOCK the following year. In 2008, Casio released a G-SHOCK with the world’s first Multi Band 6 radio wave receiver system. Casio has continually pursued radio-controlled watches that wearers can use with confidence. 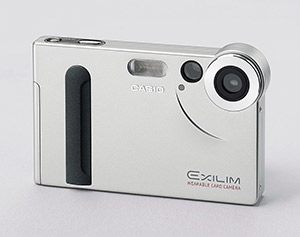 The EXILIM EX-S1 was a digital camera developed based on the novel concept of a “wearable card camera” that is with you wherever you go. By the early 2000s, the transition from film to digital cameras was in full progress. Casio developed the EX-S1 as part of its continual pursuit of value through digital technology. The camera’s most remarkable feature was its card size for amazing portability, and its instant startup enabling photo-taking just one second after activation. It was not equipped with a zoom, and the focus was fixed. By limiting the number of pixels to 1.24 million, and installing only the essential functions, the emphasis was placed on compact size and usability. This approach of pursuing the value inherent to digital cameras also supported subsequent product development. Released in 2008, the EX-F1 provided ultra-fast continuous shooting of 60 images per second, and offered the joy of capturing moments that cannot be seen with the naked eye. Two years later, the EX-ZR10 was released and offered High Dynamic Range (HDR), based on high-speed continuous shooting. This feature was only possible with digital technology and offered the fun of creating and sharing artistic photographs. After releasing these products, Casio focused on developing cameras with high-speed image processing engines, and went on to deliver models that encouraged spontaneous image capturing and that continued to provide enjoyment even after photos had been taken. 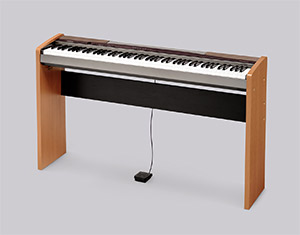 The Privia PX-100 was a digital piano that closely resembled the feel and tone of a grand piano while being compact enough to fit in almost any location. The name “Privia” was coined by blending the words, “Private Piano.” It had a stylish design targeting young women, and was named based on the concept of a digital piano that can fit in a bedroom or small apartment. Casio had previously released two full-fledged digital pianos (AP-7 and AP-5) in 1991, and developed them as part of the CELVIANO series. In 2003 however, fully-equipped electronic pianos like a CELVIANO usually cost over 100,000 yen. The PX-100 offered a slim profile, a heavier touch from keys in the bass range and a lighter touch from keys in the treble range, and an expressive timbre that carefully reproduced the sound of a concert grand piano. The result was a digital piano with improved quality, yet at a price and weight about half that of conventional models, which became widely popular. In 2015, the CELVIANO Grand Hybrid GP-500BP and GP-300BK, which had a sound source jointly developed with C. Bechstein, were released for pianists who wanted an even higher level of piano performance. By producing electronic pianos that meet various needs, Casio has been expanding the range of people who enjoy performing music. This includes children who want to try learning piano, adults who want to discover the fun of playing piano, and also those who are serious about becoming performers. 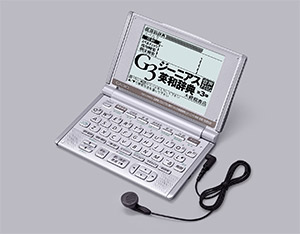 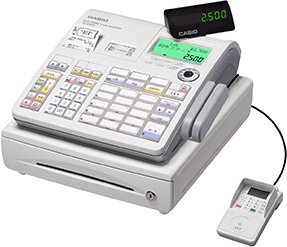 The TE-2500 and TK-2500 were Internet-ready electronic registers that could be connected directly to the Internet thanks to a built-in Virtual Private Network (VPN) function. Direct access to the Internet enabled shop owners to immediately grasp the latest sales information online from one or more shop locations. Unlike the POS system at the time, which was used by large retail chains, by eliminating the need for a computer to perform tabulation, or a dedicated data communication line, the new models made it possible to streamline sales management operations for multiple stores. As a result, the TE-2500 and TK-2500 became popular with small and medium-sized retailers and restaurants that were not large enough to need a POS system. The concept of supporting store efficiency had not wavered since Casio’s first electronic register, the Σ-50ER, released in 1976. The TE-2500 and TK-2500 were equipped with a function to handle information in a cloud-like manner, even before the concept of cloud computing became mainstream, and they helped to streamline sales management operations.