The Green Slim Projector was the world’s first mercury-free, high-brightness data projector. Being mercury-free had two benefits. First, there was no need for users to dispose of harmful mercury lamps, and because the new light source had a long lifespan, it reduced the environmental impact caused by conventional lamp replacement. With the mercury-free technology, start-up was also faster, and there was no need to let the projector cool down after use. The second benefit was that the Green Slim Projector offered the value of being always ready to use, like a television. In 2010, it was commonly thought in the industry that a high brightness of over 2,000 lumens was not feasible without using a mercury lamp. Casio, which entered the business projector market in 2003, also used mercury lamps until it developed the Green Slim Projector. Yet Casio aspired to develop a next-generation projection light source. This was based on the concept of “clean & green,” and Casio sought to achieve both a mercury-free solution and high luminance. Casio succeeded in developing a unique hybrid light source combining laser and LED technologies, delivering both environmental performance and high brightness. 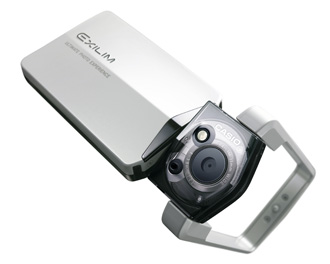 The EXILIM EX-TR100 was a digital camera developed with the concept of freestyle shooting. Its most outstanding feature was a movable frame design that clearly set it apart from previous digital cameras. The frame could be rotated 360 degrees around the lens and screen, and the screen could also swivel 270 degrees. In addition to being extremely portable, it enabled users to capture photos and movies by positioning the camera on a desk or wall, and could be held many different ways. It was first was released in North America as a model named TRYX. After a popular Hong Kong fashion model uploaded photos she had taken of herself with the EX-TR100 to a social media site, it began to be known as a camera that could capture beautiful face shots. It subsequently became a big hit among women in China and Southeast Asia, and was described in Chinese as a “goddess selfie device.” After that, the EX-TR100 was developed into the TR series of cameras designed for selfie taking. Such unique product development originated from Casio’s desire to expand the way people enjoy digital cameras — a motivation that had remained since the launch of the QV-10. The EXILIM EX-FR10 was then released in 2014. It was a camera where the lens and screen could be completely separated, overturning conventional camera positioning when taking a picture. This new form of freestyle shooting further expanded the way a camera could be enjoyed. 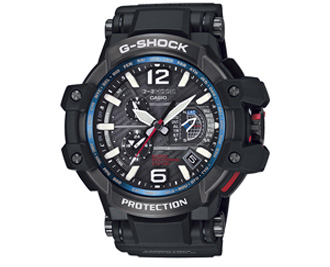 The G-SHOCK GPW-1000 was a wristwatch equipped with the world’s first hybrid time acquisition system that could perform time syncing using both Multi-Band 6 radio and GPS satellite signals. The most outstanding feature of this product was its ability to provide the exact time even in some of the harshest environments around the world. A conventional radio-controlled watch automatically syncs to the correct time using standard radio signals that include time information. The GPW-1000 displayed the correct time anywhere in the world using an additional and complementary time acquisition system that received GPS signals from satellites. This meant it worked even in regions outside the reach of terrestrial time signal transmitters. Also, by incorporating high-precision map data into the watch, it could use GPS positioning information to determine the wearer’s time zone and daylight saving status in order to display the correct time. Earlier, Casio had released the world’s first watch with built-in GPS, the PRT-1GPJ, in 1999. In addition to being equipped with location positioning and other features for outdoor use, it could display the correct time by receiving GPS signals. The technology at that point, however, had issues such as device size and battery life. The GPW-1000 became the culmination of Casio’s determination to enhance the lives of customers by ensuring they could always know the correct time no matter where they were. 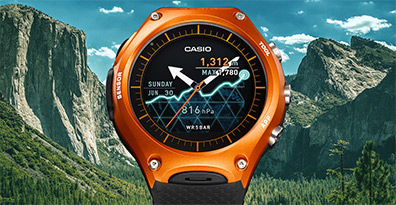 The Smart Outdoor Watch WSD-F10 was the optimal wrist device for outdoor activities. It was waterproof to ensure performance during water activities or in the rain, and it even met a U.S. military procurement standard for withstanding drops and vibration. Its best feature was its design for outdoor use. In situations where it is difficult to use a smartphone, the need for a wrist device increases. In addition to various apps that are useful in outdoor pursuits such as trekking, cycling, and fishing, the watch also came installed with original apps to measure changes in the natural environment or the level of the wearer’s physical activity using built-in sensors. Since it utilized the Android Wear operating system, wearers could also add apps to further enhance functionality for different outdoor situations. Since the 1980s, Casio had developed many multifunction digital watches that have provided information for exercise and outdoor activities. These watches include the JP-100, which supported joggers with a pulse measurement feature, and the BM-100, which could forecast the weather by using a sensor to detect changes in barometric pressure. Inheriting Casio’s accumulated expertise, the WSD-F10 provided wearers with a wrist device for fully enjoying outdoor life. 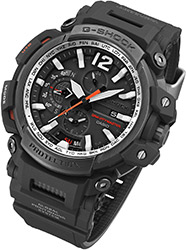 The G-SHOCK GPW-2000 was the world's first watch to be equipped with three time acquisition systems, thanks to the Connected Engine 3-Way module. The watch not only received standard time signals from terrestrial transmitters and signals from GPS satellites, but also automatically performed updates of summer time and time zone information via a smartphone connected to the Internet. It was constructed using a screwless system where the band is secured with a fine resin shaft cover and parts made of fine resin containing carbon fiber. By avoiding the use of screws that could be shaken loose by vibration, this band delivered even tougher performance. The watch always displayed the exact time and was tough and hard to break — this kind of reliability is the product value that Casio has consistently pursued.