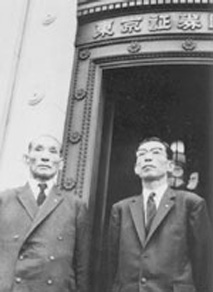 As Casio’s earnings continued to double each year, the capacity of the existing plants was not enough to meet demand. Therefore, the company decided to list its shares on the public stock exchange in order to procure the capital needed to build new plants, and to meet rapidly expanding operating capital needs. In 1970, Casio was listed on the second section of the Tokyo Stock Exchange. The initial stock price on the first day rocketed up 140 yen from the offering price to 630 yen, then to a high of 640 yen, before closing at 630 yen. The volume traded was 810,000 shares. The stock moved to the first section of the stock exchange in 1972 and was also listed on the first section of the Osaka Stock Exchange. In 1973, Casio was listed on the Amsterdam Stock Exchange, and in 1979, on the Frankfurt Stock Exchange. 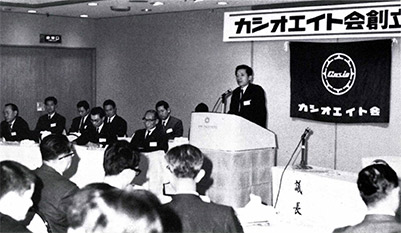 With the spreading popularity of the electronic desktop calculator (denshisiki takujyo keisanki in Japanese), the name was shortened for convenience to dentaku. Through the appearance of integrated circuits (IC) containing complete electronic circuits on one chip, and then large-scale integration (LSI) that further increased the level of integration, calculator manufacturing became much simpler. Many new manufacturers began to enter the calculator market due to the strong demand. As a result, Japanese calculator production continued to double each year, and in 1970 total sales exceeded 100 billion yen. At its peak, there were over 40 companies in the market, and this meant a period of severe competition in development and sales, called the “calculator wars.”
Meanwhile, in 1971, after another company released a calculator that cost less than 50,000 yen, Casio soon released the AS-8, priced just under 40,000 yen. Previous calculators were mainly for companies, and they were usually sold by office equipment salesmen. However, by lowering the price of the AS-8 into the 30,000 yen range, Casio sought to change the calculator from a business machine into a tool for home use.
This is why Kazuo Kashio, who was in charge of sales, came up with the idea of selling the AS-8 via neighborhood stationery stores. Before its release, he went around to stationery wholesalers with a product sample and asked them to carry it. He also explained his desire to supply retailers, and they readily agreed. Also in 1971, along with the release of the AS-8, Kazuo formed the Casio Eight Association. It included about 50 leading stationery wholesalers all over Japan with about 30,000 stationery stores under its umbrella. He succeeded in building a nationwide sales system. 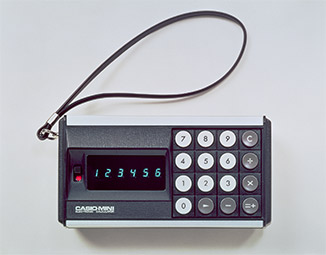 The Casio Mini was a calculator developed for personal use. It was a quarter the size of mainstream models at the time, and at 12,800 yen, it cost just a third of competing products. In those days, a calculator that sold 100,000 units a year was considered a hit, but the Casio Mini became a mega hit, selling one million units in the 10 months after its release. The success of this product represented the end of the fierce “calculator wars” that had been going on among dozens of manufacturers since the late 1960s. One of the ideas for the Casio Mini’s development came from bowling, which had become very popular in Japan. Bowling scores needed to be calculated by hand, and Casio decided to develop a small and affordable calculator for bowling. In addition to creating a six-digit display for home use at a time when the eight-digit display was standard for office calculators, the Casio Mini was realized by developing components especially suited for mass production and the incorporation of large-scale integrated circuits (LSI) for advanced and rapid calculations. The Casio Mini enabled every home to have a calculator and also contributed to the expansion of the calculator market and the development of the semiconductor industry. Subsequent technological advances led to further miniaturization and power saving for calculators. In 1983, Casio launched the SL-800, the world’s slimmest calculator, with a thickness of just 0.8 mm. This credit-card sized calculator is in the permanent collection of the Museum of Modern Art in New York, known as the technological culmination of the effort to streamline and personalize calculators. The Casio Mini and SL-800 were also listed on the register of essential historical materials for science and technology (future heritage technology) by the National Museum of Nature and Science. 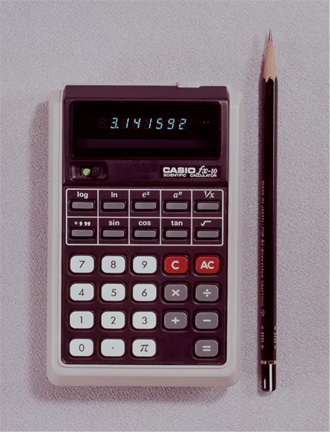 The fx-10 was a pocket-sized personal scientific calculator. In Japan in the early 1970s, scientific calculations were done using computers, the smallest of which was as large as a refrigerator. With a price of one million yen or more, they were not affordable, so most engineers did complex calculations using a simple mechanical device called a slide rule. In 1972, Casio released the fx-1, which could easily perform scientific function calculations. The fx-1 was simple to use and could perform 16 types of function calculations with the touch of a key, making it very popular. Two years later, the fx-10 was released. This was the first LSI-equipped scientific calculator to be made in Japan, and was about one-seventh the weight and roughly one-thirteenth the price of the fx-1. Thanks to 10 keys for performing frequently used functions including trigonometric, exponential, and logarithmic functions, one-key calculation became possible. It was handy to carry around, and enabled engineers to replace the slide rule with their own personal calculator. Thus was born the personal scientific calculator, today widely used around the world. 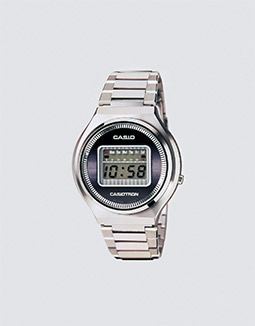 The Casiotron QW02 was the first watch released by Casio. The early 1970s was a period of technological change that saw a switch from mechanical to quartz timepieces. With a solid position in the calculator industry, Casio decided to enter the business field of timepieces. The company realized that by making digital watches, a type of quartz timepiece, it could make the most of the LSI technology it had developed for calculators.
In addition to displaying hours, minutes, and seconds, the QW02 was equipped with the world’s first watch calendar that automatically adjusted for longer and shorter months. With a conventional watch, it was necessary to reset the calendar date on the first of each month, but the QW02 eliminated this hassle. After that, Casio also realized a fully automatic calendar watch that even correctly displayed February 29 during leap years. In 1976, Casio released the X-1. In addition to telling time, the X-1 featured stopwatch and world time functions. Casio went on to develop many more multi-functional digital watches leveraging its digital technology.